One in five elderly persons in India has mental health issues. Around 75 per cent of them suffer from a chronic disease. And 40 per cent have some or other disability. These are the findings of the Longitudinal Ageing Study of India (LASI) released by the health ministry on Wednesday.


The survey found that more than one in 10 people aged 60 and above have “probable major depression” in states including Madhya Pradesh, Uttar Pradesh, Delhi, Bihar and Goa.


While age associated-decline in cognitive ability score is consistent across states and socioeconomic spectrum, it was found to be closely related to educational attainment across all ages. Depression, for instance, declined sharply from 9 per cent of those with less than primary education to 5 per cent of those with 10 or more years of schooling.


The survey covered 72,250 individuals aged 45 and above for the 2017-18 period. The full-scale national survey looked into the health, economic, and social determinants and consequences of population ageing in India.


“The evidence from LASI will be used to further strengthen and broaden the scope of National Programme for Health Care of the Elderly and also help in establishing a range of preventive and health care programmes for older population and most vulnerable among them,” Harsh Vardhan, minister of health and family welfare said. 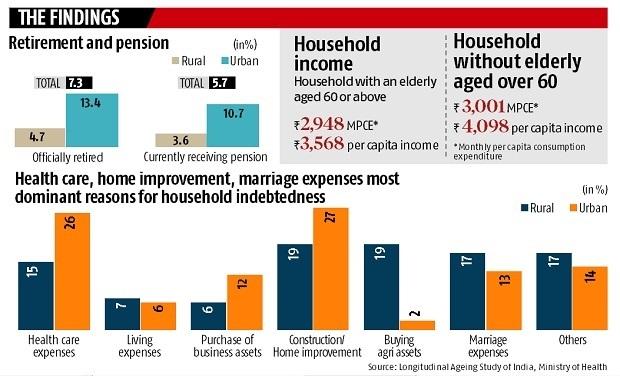 Growing at around 3 per cent annually, the number of elderly people will rise to 319 million in 2050 from 103 million in the 2011 census, according to estimates by the UN Population Division, 2019.


The prevalence of probable major depression among those aged 60 and above (8.3%) was found to be 10 times higher than the self-reported prevalence of diagnosed depression. More women suffered from depression than men in the rural areas.


More than two-fifths of those aged 60 and above, who are either currently working or had worked in the past, reported having work-limiting health conditions.


In the above-60 category, 11 per cent suffered from at least one form of impairment — locomotor, mental, visual or hearing — compared with 6 per cent in the 45-59 age bracket. A majority of them also faced mobility restrictions such as stooping, kneeling, crouching.


Almost one-fourth of those over 60 face at least one limitation in pursuing daily activities such as movement in bed, changing position from sitting to standing, feeding, bathing, dressing, grooming, personal hygiene.


Among the elderly who experienced ill-treatment in the last one year, more than three-fourths experienced verbal or emotional ill-treatment, a fifth experienced physical abuse, over one-fourth went through economic exploitation, and more than half experienced neglect. Children and grandchildren were the biggest perpetrators followed by son or daughter-in-law.