The banking and non-banking financial sectors in India showed resilience in 2019-20, but with nearly 40 per cent of the outstanding loans under a moratorium, the system may face a sharp deterioration in asset quality, the Reserve Bank of India’s (RBI’s) annual publication titled “Trend and Progress of Banking in India”, released on Tuesday, said.


The report evaluated the banking sector’s performance in 2019-20 and touched upon some views for the coming days.


In the year under review, asset quality, capital positions, and profitability strengthened. The gross non-performing assets (GNPA) ratio moderated from its peak in March 2018 to reach 7.5 per cent by the end of September 2020.


The improvement was driven by lower slippages, which declined to 0.74 per cent in September 2020, and the resolution of a few large accounts through the Insolvency and Bankruptcy Code (IBC). Fresh slippages remained the highest among public-sector banks.


However, “in 2020-21, as policy support is rolled back, the impact of the Covid-19 pandemic may dent the health of the banks and non-banks”.


The modest GNPA ratio of 7.5 per cent at the end of September 2020 “veils the strong undercurrent of slippage”.


The accretion to NPAs would have been higher in the absence of the asset quality standstill provided as a Covid-19 relief measure, the RBI said, adding, “given the uncertainty induced by Covid-19 and its real economic impact, the asset quality of the banking system may deteriorate sharply, going forward”.


The banking system stress, according to the report, is probably “obscured under the asset quality standstill with attendant financial stability implications.”


“Going forward, banks will have to adapt and adjust to the rapidly evolving economic landscape due to these challenges and also the entry of niche players and emerging financial technologies,” according to the report.


The reduction in NPAs during the year was largely driven by write-offs, as banks wrote off NPAs that required full provisioning.


A preliminary estimate based on the quarterly results of a sample of banks indicates that their GNPA ratios would have been higher in the range of 0.10 per cent to 0.66 per cent at the end of September 2020. But the Covid-19 provisioning and ploughing back of dividends “would help shield their balance sheets from emanating stress to a certain extent”.


Also, the RBI’s preliminary estimates suggested that potential recapitalisation requirements for meeting regulatory purposes as well as for growth capital might be to the extent of 150 basis points (bps) of the common equity tier I ratio for the banking system.


ALSO READ: US fund Interups pulls out of Air India race as deal with employees fails


Against this, the government has earmarked Rs 20,000 crore for capital infusion into public-sector banks (PSBs).


The banks, therefore, must raise additional resources from the market as an optimal capital-raising strategy.


In view of the Covid pandemic, the central bank aimed to give a stimulus and maintain financial stability through rate cuts, liquidity infusion, regulatory forbearance; and a time-bound resolution with additional provisions.


“Improvement in the health of the banking sector henceforth hinges around the pace and shape of economic recovery. The challenge is to rewind various relaxations in a timely manner, reining in loan impairment and adequate capital infusion for a healthy banking sector,” the report said.


However, the economy was already in a slowdown, and that reflected in the credit growth of banks. After a gap of two consecutive years, credit growth decelerated in 2019-20, reflecting both risk aversion and tepid demand. This was accentuated even more by the Covid pandemic. 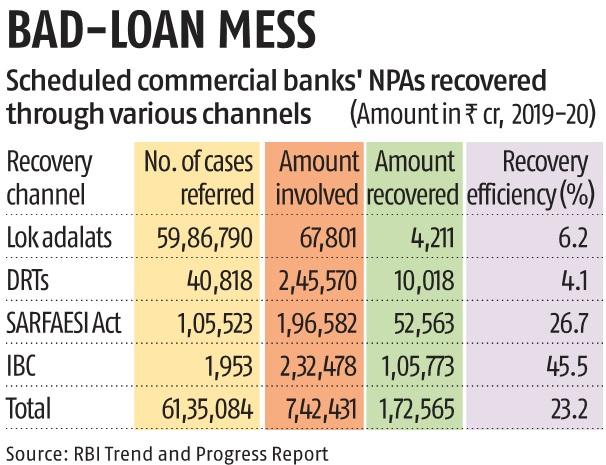 Private banks have been the “engine of credit growth during the last few years”, but their loan growth decelerated across sectors in 2019-20.


Lending to industry and agriculture by private- and public-sector banks also slowed or declined.


“The loan book of private banks was affected disproportionately relative to their counterparts on asset quality concerns and higher provisioning requirements. Credit expansion was at a higher pace among public sector banks during March, June and September, 2020 quarters, after three consecutive quarters of deceleration,” it said.


However, there was robust credit growth in rural areas. The share of rural credit in the total has been hovering between 8 and 9 per cent, but its growth surpassed that of other categories in 2019-20, after a gap of four years. The share of public-sector banks in rural credit has fallen in favour of private banks, the report said.


Of the 22 private banks, only three attracted higher foreign shareholdings during 2019-20.


The rise of alternative sources of funds caused the credit-to-GDP ratio to decline rapidly across all bank groups in 2019-20. To compensate for the muted credit offtake, public-sector banks invested in “risk free liquid statutory liquidity ratio (SLR) securities”, whereas the investment portfolio of private and foreign banks decelerated due to profit-booking in their trading books.


The commercial sector witnessed a lower credit flow from both bank and non-bank sources, but companies raised higher resources abroad.


The report also singled out investment by Life Insurance Corporation of India (LIC) in corporate debt as a silver lining. The flow of funds to the commercial sector has been higher during 2020-21 so far.


During the crisis, banks were seen as a safe haven and this led to a sharp accretion of deposits.


However, green shoots are visible now in the NBFC segment as loans and advances are rebounding.