The Centre’s fiscal deficit will touch at least 6.1 per cent of gross domestic product (GDP) in 2020-21 (FY21). This based on the first set of advance growth estimates released by the government on Thursday, ahead of the Union Budget on February 1.


This assumes the gap between Centre’s expenditure and revenue to be at least Rs 12 trillion, based on increased borrowing announced by the government in May to deal with the Covid-19 outbreak.

However, economists estimate the full-year’s fiscal deficit to range between 7 per cent and 9 per cent of GDP, against 3.5 per cent estimated by the government in the Budget. Then, the government had assumed a nominal GDP growth of 10 per cent over the previous fiscal year at Rs 224.8 trillion.


Economic activity had come to a standstill in the first quarter (Q1) of FY21, causing steep fall in revenue, followed by increased government spending in the form of three stimulus packages to revive demand.


The National Statistical Office on Thursday estimated nominal GDP at Rs 194.8 trillion — a 4.2 per cent contraction over the previous fiscal year.


Madan Sabnavis, chief economist, CARE Ratings, estimates fiscal deficit to widen to 9 per cent of GDP in FY21. “With the resumption of economic activity, the tax and non-tax revenues could see improvement. However, the gains will not be sufficient to make up for the lost revenue and will also be contingent on the sustainability of pick-up in economic activity,” he said. 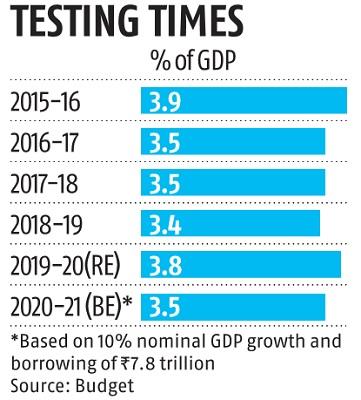 Aditi Nayar, principal economist, ICRA Ratings, projects the Centre’s fiscal deficit at Rs 14.5 trillion in FY21, which is 7.5 per of GDP.


The central government had budgeted to borrow Rs 7.8 trillion in FY21, but was forced to raise it by as much as 54 per cent in May amid decline in revenue, taking the borrowing close to Rs 12 trillion. The Centre will borrow Rs 4.34 trillion, or about 34 per cent of the full-year target, in the second half, which will account for stimulus measures and lower-than-expected disinvestment revenue.


The government had budgeted disinvestment proceeds of Rs 2.1 trillion for FY21, but only 3 per cent of that has been achieved till October.


The Centre’s fiscal deficit had widened to 135 per cent of the full-year’s Budget Estimates at Rs 10.7 trillion in the first eight months of FY21. It is 33 per cent higher than the corresponding period last year. The fiscal deficit had breached the Budget target in July itself as the economy faced the most stringent Covid lockdown in Q1.


Finance Minister Nirmala Sitharaman had last month outlined the government’s resolve to increase spending to support the economy without worrying about the fiscal deficit target.